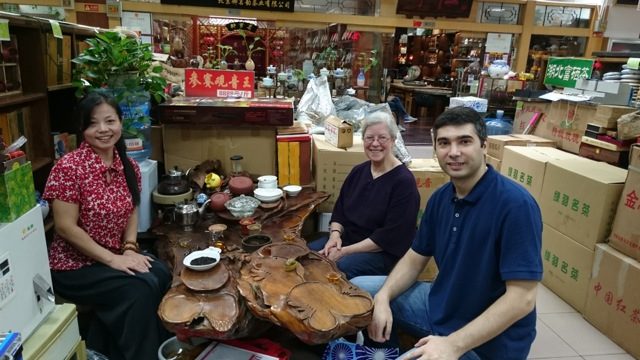 Ioannis with Professor Liang Rong and a colleague

Ioannis speaks fluent Greek, English and Chinese, he has spent close to 14 years living and studying in China. This gives him a unique perspective on the traditions and practice of TCM that many of us in the West don’t get to experience.

I believe that one of the best ways to expand our minds and practice is to be open to different perspectives then our own. This is why his story is an important one to share.

Ioannis’s work has been guided by curiosity and backed up with rigorous research and study. As he urges in his second book, ‘Developing Internal Energy for Effective Acupuncture Practice’, we can become better healers by discovering the root of the tradition through our own efforts and applying it in a personalized way.

We don’t have to re-invent the wheel, but guided by the ancient theories we can allow our own understanding to flourish, because, at the end of the day, in the clinic we can only apply what we understand.

Ioannis has a lot to teach us. I’m thrilled that he has agreed to share some of his knowledge and reflect on the path that led him to his work in China.

Jenny: How did you end up in China?

Ioannis: It all started in 2002, when I came for a 5-month clinical internship in Beijing. The trip itself was a cultural shock for most of the students in my cohort. China always is, and people often need time to adjust. Unfortunately, at some point there was a lot of competition, lack of courtesy, arrogance and eventually friction. So, instead of enduring the negativity, I started skipping clinic to pursue other related interests.

It turns out that these “other interests” had a pivotal effect on my medicine. For example, that’s when I first started training with master Cui Fushan who taught me Yiquan (which is one of the rarest internal martial arts). That was also when I met my “Neigong Shoufa” (Qigong Hand Manipulations) teacher who recently allowed me to officially inherit the system through a “Discipleship ceremony”.

Jenny: That’s quite an honor. I think the background of this training would interest us in the West.

Ioannis: He is one of the many teachers that I followed over the years, but he still works for the military, and because it’s extremely illegal to publicly teach a foreign student, I cannot mention his name before his retirement. He also did not teach me immediately, I had to literally beg for several years before he finally agreed in 2006.

Training included learning the various energetic aspects of the art (internal and external), and later the small “taolu” (healing forms). Towards the end, I had to practice my skills on patients under his observation. I remember him asking the patients about how my touch feels in relation to his, just to make sure that I was using the skill correctly, and then he would go on to teach me something more on top of that.

In China there are many smaller healing approaches, modalities and micro-systems (supposedly all falling under the umbrella of the all-inclusive TCM system), and most of them don’t have a name. People usually don’t notice them until someone points out the differences.

Many of those modalities are complete systems with a distinct philosophy and approach to healing. However not much work is being done to locate, research and preserve them, because people are not always open to sharing knowledge, or because some systems cannot be easily standardized, or in some cases just simply because they go against current trends. Most people tend to recognize some of those in acupuncture, moxibustion, tuina or traumatology because of clearly observable differences among what different people do around China.

A few years ago I read that besides the official tuina taught in colleges, there are at least 200 smaller complete bodywork systems. These are never openly taught in colleges or public classes. Getting included into the world of truly traditional medicine (herbal, energetic or otherwise) and finding a good teacher is quite important for some of us, but also really difficult. Important, because sometimes an alternative view can help us to better understand the mainstream.

In the summer of 2003, after completing the Chinese Medicine degree in London, I moved to China. I left all of my TCM books and notes back in Europe, and I allowed myself to start from the beginning, which was actually a very wise thing to do. 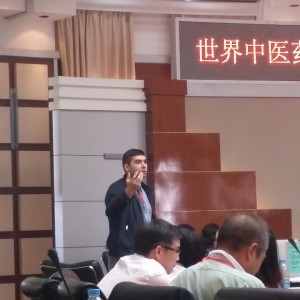 Ioannis speaking at a conference in Nanchang, China

Jenny: You willingly chose a difficult path and certainly not one that conformed to the norm. Can you share your thoughts on the choices you made in your study of TCM?

Ioannis: I think that if you have a skill, patients will seek you out, and if you don’t, any amount of advertisement won’t help.

In general, most skills in Chinese medicine need to be acquired first from reading the classics, and secondly through forming a direct teacher-disciple relationship. For all Chinese arts, discipleship is vital, and prior to the propagation of the TCM system, the structure of formulas, choice of herbs, and special preferences were all clearly identifiable markers, almost like a signature for the school of thought or lineage.

Acupuncture technique and tuina forms were also different among the various lineages. One of my teachers in Beijing still covers his hand with a towel during manipulations to prevent outsiders from copying his method. But today, because of the TCM system, most of these traditions die off because, well, it’s easier to learn in a class and follow generic instruction just to pass exams.

Also, for most medical skills you will have to memorize (or at least familiarize yourself) with the classics. Liu Du-Zhou said, “If you don’t memorize at least one of the classics, you have no skill that others can trust.” This is really important, I think.

In recent years I do try (as much as I can of course) to follow the same path that the older generation followed by default, and for this reason I often carry around a small booklet with some significant texts, to help me with my research interests. But this takes years. Even Deng Tie-tao, said that his understanding of our medicine became clear only around the time of his retirement.

This is what martial artists refer to when they say it feels like climbing the mountain. Although you can never reach, let’s say, a theoretical mountaintop, your can see clearer and much beyond as you get higher up.

Jenny: What are your thoughts on making a living, being excellent at what you do, and helping your patients?

Ioannis: This actually depends on whether the focus of your practice is to treat the disease of patients, or merely to provide relaxation and related services to customers. These are two totally different things. You don’t have to be the next Zhang Zhong-jing (author of the Shang Han Lun) to make money.

Some people with, perhaps a degree in TCM, but only a rudimentary understanding of our medicine, are able to market themselves as Gurus and attract the rich and famous, making a lot of money. If I had a disease though, I wouldn’t trust such a person.

Here’s two important questions to ask yourself as a practitioner, and these helped me establish my direction at some point in the past.

I think these are important questions, and they get directly to the heart of the matter. I believe that whoever can answer them sincerely, can certainly achieve many things.

Jenny: What do you mean by sincerely?

Ioannis with his publisher Jessica Kingsley, buying tea in the MaLianDao tea market.

Ioannis: I mean a direct answer, yes or no without lying to yourself. It’s more like putting yourself on the spot, and giving it a Yoda Moment, “do or do not, there is no try”.

Ioannis: Ha! Although he is fictional, Yoda did offer some great life quotes. But, I am definitely not the one to judge people’s choices, and whatever it is that you do and for whatever reason, if it fulfills your dreams, you do it with passion and love and makes other people happy, then fair enough.

Ioannis: Well, just briefly, you should make your medicine your own. Research the classics and relate the ancient ideas to your experiences. Study the lives of the older doctors, to get inspiration, but never move away from your own ideas. And always combine concepts if they make sense. That’s all I think.

That’s a lot! Thank you Ioannis for sharing your thoughts, time and passion for TCM with us. I hope you’ll make a return visit.