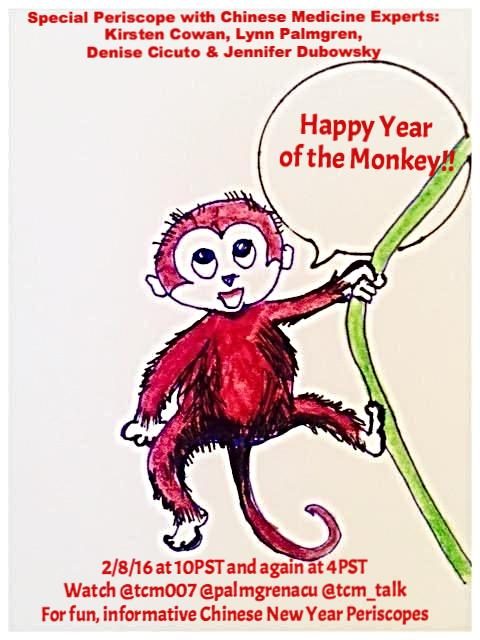 Tune in to Periscope at noon tomorrow 2/8/16 as I and fellow Chinese Medicine experts, Lynn Palmgren, Kirsten Cowan and Denise Cicuto will each do a short scope (live streaming, interactive video) in succession for the Chinese New Year.

Don’t know what periscope is? Learn about it here.

I plan to fill you in on some exciting historical facts about Chinese Medicine and give you a couple tips to bring you good luck in the year of the Monkey. Lynn is going to share some traditions that come with the Chinese new year. Denise will be talking about the change of elements along with the seasons as well as setting intentions in the new year. Finally, Kirsten has some delicious suggestions to rejuvenate your skin!

Beginning at 10 PST (That’s 12CST for those of you in Chicago) you can catch me (@tcm007) on periscope followed by Lynn Palmgren (@palmgrenacu) and then moving to the West coast, we’ll have Denise Cicuto (@tcm_talk). For the grand finale later in the day at 4PST/6CST, watch Kirsten Cowan (also @tcm_talk).