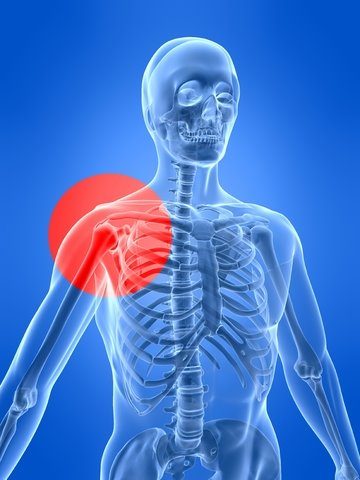 ‘Acupuncture Beneficial For Shoulder Pain’
The shoulder is a very complex set of joints involving bones, muscles, ligaments and tendons, allowing for the largest range of motion in the body. This range of motion allows us to lift, throw, push, pull, reach and twist and to raise or lower our arms. This flexibility has a price, however, in a lack of stability that leads to a propensity for shoulder pain and injury.

TENDONITIS: there are several types of tendonitis in the shoulder.

• Acute tendonitis is a result of repetitive movements and overuse, such as butterfly stroke, ball throwing in cricket or other work related activities.

• Chronis tendonitis is more as a result of natural wear and tear, or the result of a degenerative disorder.

• Tearing of tendons can result from an acute injury or degenerative changes due to overuse or aging. The tendons actually develop a tear in the fibres.

BURSITIS: A bursa is a small fluid filled sac located around joints. It cushions the movement between the bones, tendons and muscles near the joints. Bursitis is an inflammation of the bursa, usually due to repetitive movement. It is probably one of the most painful shoulder problems, limiting any movement so the shoulder becomes very stiff.

INJURY: sometimes, bones in the shoulder are forced out of their normal position (dislocation) Recurring dislocations can cause pain and unsteadiness when the arm is raised or moved away from the body, they also loosen the tissue around the joint, making future dislocations more likely.

ARTHRITIS: this is a combination of wear and tear in the joint combined with inflammation, causing swelling, pain and stiffness. In Chinese medicine, we have the 14 major channels or meridians that carry Qi (energy) and Xue (blood) around the body. When energy and blood circulation gets blocked, it results commonly in different sorts of pain and even inflammation. If not treated in the early stage, the reduced flow of energy and blood will also result in insufficient nutrients to the shoulder, causing muscle atrophy. There are a number of meridians going through the shoulder and so different symptoms will involve different meridians. Small fine needles are placed in specific points locally and sometimes down the arm or leg. The needles may be connected to an electro stimulator. Other Chinese medicine modalities like Moxa and/or cupping may be used as well as tuina massage.

FROZEN SHOULDER: Although some of the above conditions are sometimes referred to as frozen shoulder, probably because of the restriction in movement, they are not. The medical term for frozen shoulder is Adhesive capsulitis. It is probably the result of an inflammatory process that causes the capsule surrounding the shoulder joint to thicken and contract. Patients will experience immense pain at the early stage. A decrease in pain, whilst more comfortable for the patient, may actually indicate further damage and indicates the patient going into the late stage of frozen shoulder development. Scar tissue and collagen are formed and wrap around the shoulder capsule. This gives rise to restricted movement and the shoulder becomes stiffer and stiffer. In Chinese Medicine, the name for frozen shoulder is ‘50 year shoulder’ and has three distinctive syndromes:

1. The early stage: Painful stage. Pain that may change with the weather. Treatment: Warm the channel to expel cold and remove blockage to remove pain.

2. Middle stage: Frozen stage. This is the chronic stage where the pain is constant and there will be severe limitation of movement. Treatment: Activate the channels involved, remove blood stasis and muscle stiffness and relieve pain.

3. Late stage: The main complaint is a vague shoulder pain. There could be muscle atrophy and still limitation of movement.

A recent trial in Sweden showed Acupuncture to be more efficient than traditional treatments such as Physio and Ultrasound. 85 adults, aged between 30 and 65, who were identified as having some form of shoulder impingement syndrome for at least 2 months were qualified for the study. Randomly they were allocated to receive Acupuncture or Physio.

The Acupuncture group received 10 treatment sessions over a 5 week period. The Physio group received ultrasound therapy twice a week over the same 5 weeks. Additionally, a home exercise program was regularly performed and logged by both groups.

If you are suffering shoulder pain, please contact the clinic and we will endeavour to help you recover. Relief is possible, so don’t delay!